Today I want to take a little time to focus on a non-feathered inhabitant of New Jersey’s many nature parks, the Painted Turtle. A common northeastern reptile, I encounter Painted Turtles on many of my excursions, as I am sure do most nature lovers. I am very fond of these colorful little guys, with their often grumpy faces and knowing eyes.

The Painted Turtle is one of the most common turtles in North America, being found from the Atlantic to the Pacific. In New Jersey they are most active between April and September. Because of their wide range, there are actually four types of painted turtles: Eastern, Midland, Western, and Southern. Therefore, the turtles that I see here in New Jersey are most likely of the Eastern variety.

As its name implies, the Painted Turtle is very colorful. Its black or dark brown skin is striped with a series of horizontal red and yellow streaks. The stripes reappear on the turtle’s butt. Its similarly dark brown shell is edged in red flashes. All together these markings make the Painted Turtle very recognizable. If you are on the lookout for a Painted Turtle, don’t be looking for anything too big. They typically don’t grow larger than seven inches. Generally the females do grow larger than the males, but not to the degree that you could identify the genders by size alone. Usually, they will not grow beyond the means of their habitat, basing their size on the available food in the area.

Known as a “pond turtle,” Painted Turtles adapt to almost any body of still water. They are commonly found in ponds, marshes, beaver ponds and slow moving streams, however they prefer bodies of water with muddy bottoms and vegetation. The presence of water is key, as they are very active swimmers. Besides swimming, their other favorite activity is basking in the sun. If you approach a pond quietly, you are almost guaranteed to see at least one basking turtle, with its neck and back legs outstretched to their limits, balancing on a rock or log and soaking up the rays. But be ready for the “kerplunk” that inevitably follows. The minute the turtle senses your presence it will pop back into the water for safety.

Breeding season for the Painted Turtle begins in early spring. At that time males can be observed leaving their ponds and habitats and sometimes crossing a lot of terrain, in search of a female. Once they have mated, the female nests between May and June. She will typically build her nest within a few yards of the body of water she calls home, but some females have been known to travel greater distances to find the ideal nesting area.

Painted Turtles can lay anywhere between two and eight eggs, however five or six is typical. Once laid, the eggs will incubate for up to eighty days, usually hatching in late summer. The hatchlings, who look like miniature adults, will remain in the nest until the following spring. And who would blame them? It is a dangerous world for a little turtle. Painted Turtle nests are commonly raided by skunks, raccoons, foxes, snakes and other small mammals that eat the eggs. Once hatched, the juveniles are still in danger. They have been known to be eaten by large fish, snapping turtles, herons, crows and raccoons. Humans also cause some casualties both with vehicles and lawn mowers.

The young Painted Turtle’s best strategy for survival is to get bigger, and those that survive the early days do just that. While adult Painted Turtles are omnivores and eat a combination of meat and vegetation, the young Painted Turtles’ diet is a concentration of meat protein. With the nutrients present in the meat, they are able to double in size in their first year out of the nest. Once they grow larger, their diet will become more varied. Adult turtles eat beetles and other bugs/insects, algae and small fish. If they survive their first few years, Painted Turtles can be in for a long life. They have been known to live between twenty and forty years in the wild. They reach sexual maturity and begin breeding around ten years old.

We all have our problems and bird watchers are not immune. After three years of feeding the birds, I have developed a love/hate relationship with our furry, gray friend with his/her bushy tail. You guessed it, I am referring to the Eastern Grey Squirrel.

When I say love/hate, please understand that the worst thing I do is chase them off. I have invested in a few deterrents, with mixed success, including a squirrel guard (not unlike a backward funnel that they supposedly can’t maneuver around), and a slinky, which did work to keep them from climbing my original pole. My new pole has many low hooks, etc. and I have somewhat given up my active attempts to keep these greedy little buggers out of my feeders.

Their antics are fairly amusing and I have begun to think them akin to monkeys, because of some of the positions and situations they manage to get themselves into.

They are fun and sometimes even cute, so I humor them. I do however, recognize that they are eating their way though my wallet, especially when they get up on my feeders and help themselves. Once I came home to a squirrel on the feeder, systematically pushing the seed out to at least five of his buddies, anxiously waiting below, faces turned heavenward. Another time, they had managed to open my suet holder, and knock out a new bar of suet. Not super crazy. However, by the time I caught up with them, a pair of them were trying to run off with the whole suet, one squirrel on each corner. So well planned and executed, I almost let them have it….almost.

They wouldn’t bother me so much if they stayed on the ground and ate what was dropped. However, their chewing and knocking has broken countless feeders (many of which were not very good quality to begin with, I will grant you that). I have even considered feeding them separately, but I decided that might only serve to attract more of the hungry little things to my yard.

To make things worse, they seem to have been teaching the chipmunks bad habits! 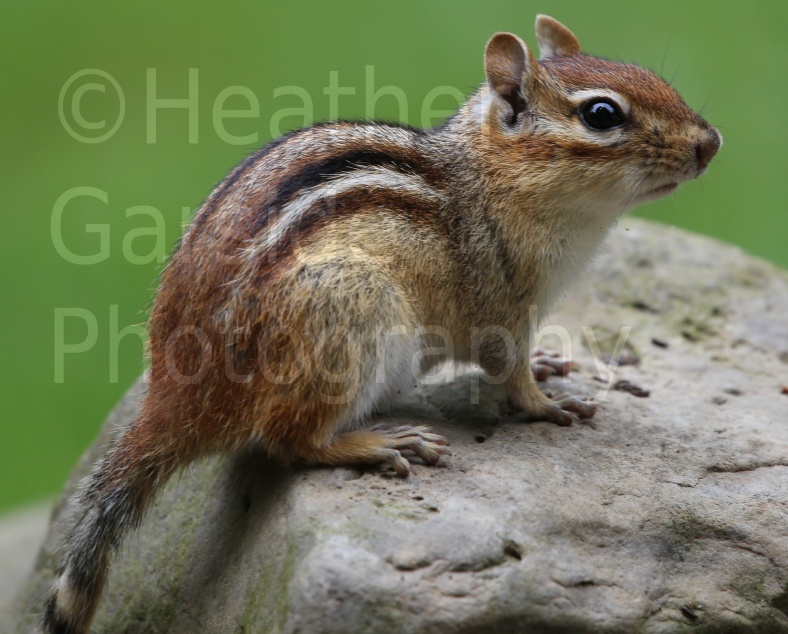 In my bird watching pursuits I often encounter and observe other animals and insects. One mammal that I happen to have frequent encounters with is the chipmunk. Like squirrels, they are attracted to my feeders and they come from all around the block to collect seeds in my yard. Unlike squirrels they give off a series of chirps or chips that can be mistaken for birds. You can watch a video with several of these calls at, https://www.nationalgeographic.com/animals/mammals/group/chipmunks/ scroll down to about halfway and look for WATCH: A Short Guide to Chipmunk Noises.

Despite encyclopedia Britannica’s description of them as “basically pygmy squirrels,”you will know a Chipmunk from a Squirrel instantly. Besides being much smaller in body than a squirrel and significantly less fluffy of tail, the chipmunk is chestnut brown, with two groups of stripes, black-white-black, down its back (left and right).

Unfortunately for squirrels, Chipmunks have been classified by society as the cute rodent. And I will say, they have been less disruptive to my feeders than the squirrels. Chipmunks in my yard tend to stick to the ground, gathering what seeds have fallen from the feeders. Only on occasion have I found a chipmunk actually up the feeder pole, which is surprising considering they are very good and quick climbers.

I think it is a combination of their large soulful and innocent black eyes, along with their pudgy overstuffed cheeks that make us associate them with all things cute and childlike. Like a greedy child at the candy store, if they feel safe, they will sit and rearrange the contents of their cheeks until they can maximize capacity. Perhaps we must also factor in the influence of Chip, Dale, Alvin and his brothers into our culture’s fondness for Chipmunks.

Most Chipmunks in the wild will live for about two or three years. There are twenty-four species of Chipmunk in North America, but if you live in the Northeast, at a lower altitude, you are probably coming face to face with the Eastern Chipmunk, the largest of the species. A daytime mammal, Chipmunks spend all of their time gathering and storing food for the winter months. They have a varied diet which includes not only nuts, berries, fruit and grain, but also insects, tender plants and fungi. They have gotten into my garden more than once and chewed up my young plants and I think, though I haven’t seen them in action, they sometimes take a bite out of my green cherry tomatoes.

Understanding the mad dash for winter provisions makes the life of a Chipmunk all the more transparent. Chipmunks hibernate through the winter. However, they don’t always sleep straight through and, more importantly, unlike bears, they can’t store fat to live off of in their sleep. Instead they need to have ready food available in their winter hideaway for a mid-winter snack.

Chipmunks only stop collecting winter provisions long enough to procreate. The female Chipmunk is pregnant for about a month before she gives birth to anywhere between two and eight babies. The babies are only with the parents for two months before they are sent packing, so that they can gather their own winter cache. Chipmunks can have two broods a year, usually in the spring (April or May) and summer (July or August).

Besides mating and baby rearing, Chipmunks usually hang solo and they also tend to be fairly territorial. I will sometimes have two or three gather around my feeder at one time, but they avoid each other and once they have stuffed their pouches, off they go, beating the same path they took to the feeder. They like cover for their burrows and nests and you will often find them living near bushes, stumps, woodpiles, rock walls or, in more populated areas, under porches, plantings or ever sidewalks. In my yard, one definitely lives under the garage and another lives in the rock wall that represents the property line. At least one tunnels in my garden…I think he may be akin to Charles Bronson’s character in The Great Escape, because he has undermined almost my whole raised bed.