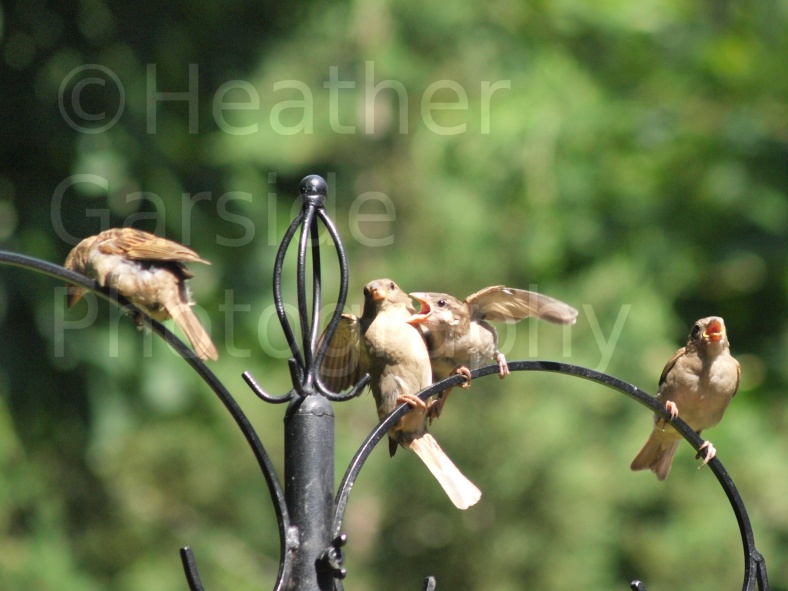 As I indicated in my post about hatchlings, juvenile birds exhibit a whole different set of behaviors from younger birds that justify their own discussion. To quickly recap, the growing phases of a bird are: 1. Egg, 2. Hatchling (or nestling), 3. Juvenile, 4. Adult.

When observing a juvenile bird I often reflect on how appropriately they were named. In the English language juvenile has a negative connotation that many of its synonyms don’t carry. When one acts juvenile, one is usually acting in a way thought to be beneath our actual age. Acting childish. While I am sure that birds are not familiar with the nuance and cultural associations of the word juvenile, they often live up to its definition and all that it implies.

The best way to think of a juvenile bird is to compare it to a kid in Middle School. Awkward, gawky, silly, unknowledgeable, unworldly. All of these adjectives can be applied to the juvenile bird. This is the stage of their development when they set foot in the world on their own. And they aren’t really sure about the whole thing. Often their parents are at a discrete distance, observing and prepared to intervene.

Young birds can be a lot of fun to watch. Their antics as they interact with a world they don’t fully understand can sometimes leave you in stitches. Many of the young House Sparrows that visit my feeders have a really hard time figuring out how and where to perch. They loose their balance easily and sometimes they slide down the feeder pole in slow motion, unable to figure out what is going on, or how to stop it.

Often juveniles are fearless when it comes to getting a handout. Many of the young House Sparrows and even one or two young Blue Jays have come to my feeder and then opened their mouths expectantly to any adult bird that came near. One female Cardinal was particularly taken aback by this behavior. She hopped back and then quickly skirted away from a small army of open mouths. Most adults just ignore this behavior, although some parents will continue to mouth feed even as they are trying to teach their children to fend for themselves.

Sometimes juvenile behavior isn’t as funny. My parents have a lot of trouble with young Woodpeckers flying under their porch roof and nearly injuring themselves as they desperately look for a safe place to land. They soon learn, but the first few days are concerning, both of the birds and whoever has dared to sit on the porch.

It is sometimes hard to tell the difference between a juvenile bird and an injured bird at first glance. Juveniles often flutter their wings at a quickened, almost frantic pace which can seem to indicate that they are hurt. In fact, this behavior is used in some species of bird to inform parents that the baby wishes to be fed.

Appearance and identification are sometimes difficult when it comes to juveniles. Even though many field guides provide an image of juvenile birds, each bird develops at its own rate, meaning that coloring and major identifying markers for some species may not be easily spotted. Some birds, such as the many kinds of Warblers, have very similar juvenile development, making an exact match hard. However, if you are having trouble identifying a bird, there are some quick clues you can look for which will tell you if you are looking at an immature bird.

Fuzz is the first big clue. Whether it is a downy fluff sticking out under the wings or covering the bird’s belly, immature feathers that don’t seem in harmony with the rest of the bird’s plumage can be a good indicator. Like baby teeth in humans, adult feathers develop gradually and many juvenile birds are still a bit fuzzy here or there.

Inconsistent coloring is another indicator. Some birds will look really weird, or almost sick, with very patchy coloring. Chances are they are a young bird, just developing the mature feathers of an adult of their species. Be careful of the time of year with this indicator though. Many birds, including several different species of duck, develop a different plumage when they are not breeding. When mating plumage is developing or phasing out they can exhibit similar patchy qualities to juvenile birds.

You may recognize the shape of a bird, or the overall appearance but it is not the correct color. There are many juvenile birds that develop mature looking feathers that are not fluffy but also do not resemble those of their parents. This is true of starlings. Many male juvenile birds resemble the adult female in coloring and develop their more colorful mating plumage slowly.

How big are they? Many young birds do not develop their full adult size immediately. If you have many of the same species near each other, compare the bird in question to others of the same kind. If it is smaller in statue, it is likely a juvenile. If other birds aren’t around for comparison, consider the bird’s own proportions. Does it’s beak or feet look too large? These signs can also indicate a bird that is not yet fully grown.

Depending on where you live, you may have a variety of fledglings visiting you all summer long as some birds have two or more broods. Generally, the juvenile phase lasts about four weeks for most feeder birds.