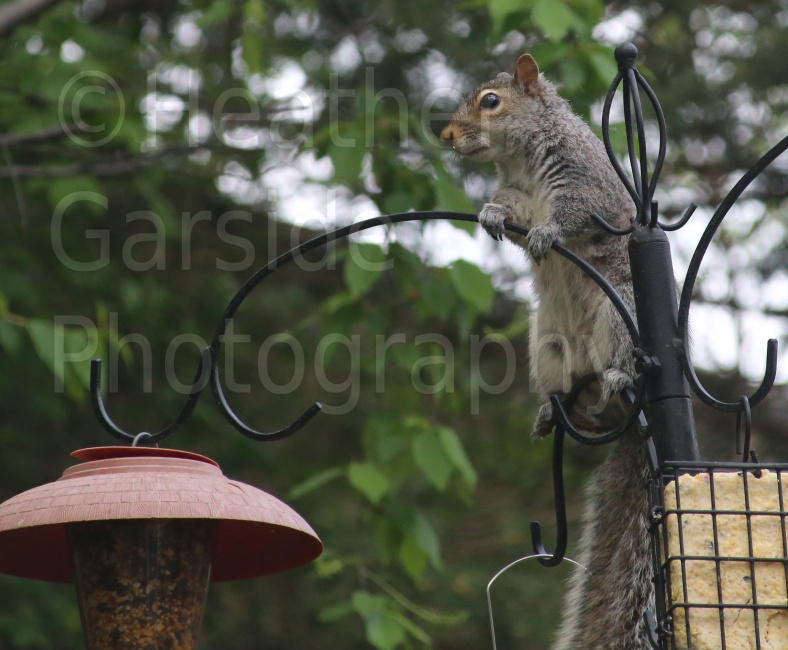 We all have our problems and bird watchers are not immune. After three years of feeding the birds, I have developed a love/hate relationship with our furry, gray friend with his/her bushy tail. You guessed it, I am referring to the Eastern Grey Squirrel.

When I say love/hate, please understand that the worst thing I do is chase them off. I have invested in a few deterrents, with mixed success, including a squirrel guard (not unlike a backward funnel that they supposedly can’t maneuver around), and a slinky, which did work to keep them from climbing my original pole. My new pole has many low hooks, etc. and I have somewhat given up my active attempts to keep these greedy little buggers out of my feeders.

Their antics are fairly amusing and I have begun to think them akin to monkeys, because of some of the positions and situations they manage to get themselves into.

They are fun and sometimes even cute, so I humor them. I do however, recognize that they are eating their way though my wallet, especially when they get up on my feeders and help themselves. Once I came home to a squirrel on the feeder, systematically pushing the seed out to at least five of his buddies, anxiously waiting below, faces turned heavenward. Another time, they had managed to open my suet holder, and knock out a new bar of suet. Not super crazy. However, by the time I caught up with them, a pair of them were trying to run off with the whole suet, one squirrel on each corner. So well planned and executed, I almost let them have it….almost.

They wouldn’t bother me so much if they stayed on the ground and ate what was dropped. However, their chewing and knocking has broken countless feeders (many of which were not very good quality to begin with, I will grant you that). I have even considered feeding them separately, but I decided that might only serve to attract more of the hungry little things to my yard.

To make things worse, they seem to have been teaching the chipmunks bad habits!